The Association President of 2000-2002 was Jack Lord, of Towneley Golf Club. Jack, who had been the organiser of the Association Seniors' Championship and a very active and helpful assistant to the Junior Organiser, was the first ELGA President to be elected from Towneley or any other of the municipal clubs in the Association.

During the season of 2000, Ben Scott, of Burnley, achieved the unique distinction of becoming not only the ELGA Junior Champion but also the Association Champion.
He won the Championship in June, at Nelson and the Junior Championship, at Green Haworth, in August. Ben first played for the full Lancashire side in 2001 and made seven appearances before leaving to take a place at an American Universiry representing Burnley Golf Club along with County team-mate Michael Hunt, he won the Lancashire Scratch Foursomes Championship at Clitheroe.

In the same month of 2003, 12 year-old Jack Brooks, of Blackburn, won the English Boys' under-14 Open Amateur Championship for the 'Reid Trophy', at Porters Park Golf Club in Hertfordshire. A closing round of 74 to add to his opening 73 gave him a winning tally of 147.

By the end of the 2004 playing season the Lancashire Union of Golf Clubs were becoming increasingly concerned about the counties poor results and lack of success over the past eight or nine years. What was more upsetting was the fact that it was Yorkshire who continuously dominated the Northern Counties League and Championships.

It was felt that the success of the White Rose County was due to the highly competitive scratch matches played between the several Yorkshire district unions keeping their county players sharp and relaxed in match play situations.

The LUGC’s answer was to set up a similar type of scratch league for the different golf associations in Lancashire.
The idea was approved by a meeting of the regional delegates at Pleasington Golf Club on Wednesday 1st December 2004.
The league was split into two groups with the group winners playing off in a final to decide the winners.
Group A comprised Bolton, Fylde and Southport and
Group B comprised Bury, East Lancashire and South Lancashire.

The final was held on Tuesday 30th August 2005 at Royal Lytham and St Annes Golf Club. 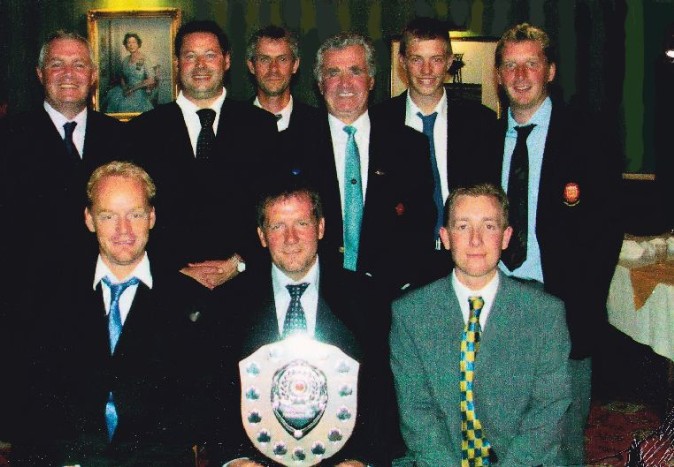 At the 2006 AGM held at Whalley Golf Club, on Wednesday 15th March, Frank Wharton, of Shaw Hill Golf and Country Club, relinquished his position of Association Honorary Secretary/Treasurer, and was immediately elected to the office of President.
Frank had efficienty served the Association for six years, Following a nlne-year commitment as Honorarv Secretary of his club.
Burnley Golf Club's Brian Goodwin, the Association's Assistant Secretary,reluctantly accepted the position of Secretary / Treasurer, but tendered his resignation following six months in the office.

On 21st August 2006, at Chorley, the ELGA Boys'Team beat the Fylde Golf Association Juniors, by a convincing 13.5 matches to 4.5,to win the Lancashire Inter-Region Junior Championship. The team, captained by Accrington's Ryan Foster and overseen bv the ELGA Junior Organiser, Michael Green, won the Championship for the first time since 1997.

FURTHER  INTO  THE  SECOND  CENTURY
Following Brian Goodwin’s resignation from the position of Honorary Secretary/Treasurer on health grounds in 2006, a volunteer replacement was installed, but sadly after a few months, he was found to be ‘not quite up to the job’ and somewhat inefficient.

Frank Wharton, the centennial President, heroically volunteered to be reinstated to his former position as the Association’s Honorary Secretary/Treasurer even though there still remained almost a full year of his presidential tenure to complete. Frank continued to carry out his presidential duties and those of the Secretary and Treasurer with the demoted volunteer as his assistant.

In June of the Centenary year, Nelson retained the Association Scratch Shield, at Rossendale, taking their fifth scratch championship title in nine years and their ninth since becoming a member club of the Association in 1907.
T.H. (Harry) Riley, a past Captain of Baxenden, was elected Association President in March 2008. Harry had acted as the Association starter for at least ten years, when he took over the mantle from the inimitable Ken Fish, and even though he had to fulfil his presidential duties Harry insisted on keeping his role as starter for all competitions. Woe betide anyone who was late on the tee!

When Stephen Keighley, a member of Pleasington, was elected President of the Lancashire Union of Golf Clubs for 2009-10 he became the fourteenth member of an East Lancashire club to hold the office. Although Stephen was a former member of Stand Golf Club his forefathers were influential and esteemed members of the Burnley Glen View Golf Club.

The 2010 Annual General Meeting saw Kevin Lynch installed as the Association’s thirty-fifth President. Kevin, the first from Green Haworth to be honoured with the presidency, had been a quiet and tireless worker on the Executive committee for almost a dozen years.

2010 saw Accrington retain the Scratch Shield, on their home course and Clitheroe’s Danny Nutter finally won the Harold Ryden Association Championship, at Wilpshire. Danny was victorious over the home club’s Louis Laviscount  after making three unsuccessful appearances in the final.

During Kevin’s second year of office, Andy Samuels retained the Senior’s Championship on a wet and windy day at Green Haworth and it was rather nice to see the Net prize on that day going to Shaw Hill’s Bill Parkinson, the MD of Moorhouse’s Brewery, who were the sponsors of the event.

At Pleasington, Accrington won the Scratch Shield for the third time in as many years, a feat the club had achieved only once before when they won four consecutive Championships in the early 1950s.

The Association Scratch team reached the final of the Lancashire Scratch League under the guidance of team Captain Clive Robertson, but they suffered a heavy loss, by six and a half games to a half, at the hands of a strong and experienced Southport and District team at Morecambe, on 13th August 2011 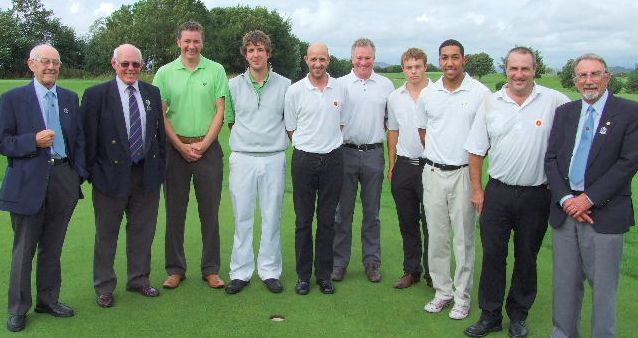 After Turton Golf Club had made two applications to join ELGA and put forward a strong case as to why they should be accepted, even though they were still a member club of the Bolton Association and had no intention of resigning, they were eventually accepted at the start of the 2012 season. Turton then became the East Lancashire Golf Association’s twenty-fourth Member Club.

After the regional team captains found difficulties in finding players prepared to participate in the matches the Lancashire Scratch League was reduced to 5 man team event for the 2012 season.
On Saturday 7th June 2012 fog descended on Nelson Golf Club causing the ELGA Scratch Shield Championship to be abandoned. It was replayed, at Nelson, on the 20th June but, due to fixture clashes, six clubs were unable to participate. The home club were victorious by ten strokes.

For the first time in the history of the Association the Junior Championship was won by a young lady.  Wilpshire’s Elizabeth Stebbings, playing on her home course, eclipsed all the boys and several girls to mark her place in the annals of the Association. 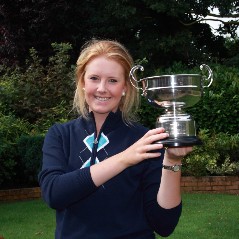 Following a Town League meeting in 2011 Mike Taylor and Rob Harrison, E.L.G.A's ,newly appointed junior organisers introduced the Junior Challenge Tour for the 2012 season whereby the association clubs very own junior opens would be utilised to accumulate individual merit points over the full golf season, finally being completed following E.L.G.A's own Junior Open Championship.
The inaugural champion for the Gross award was Dominic Kadic of Accrington whilst Peter Richardson of Wilpshire picked up the Nett award.

Following the success of the initial tour it was decided for the 2013 season to allow Non E.L.G.A. juniors onto the tour to help boost overall attendances, the first Gross winner being Mark Hyde of Haigh Hall .

The 97th Association Scratch Shield was held at Darwen, in June when Accrington again took the title giving the Oswaldtwistle based club four Shield wins from the last five years.

The results of the 2013 Harold Ryden qualifying round, held at Clitheroe were, due to a clerical misunderstanding, rather unsatisfactorily decided at the lower end of the knock-out playing order. The situation was eventually unravelled and the ties culminated in a hard fought final encounter between two worthy finalists, both of them Clitheroe members. Mark Ashworth prevailed, by one hole, over Andy Heesom giving Mark a hat trick of Harold Ryden Championship titles. 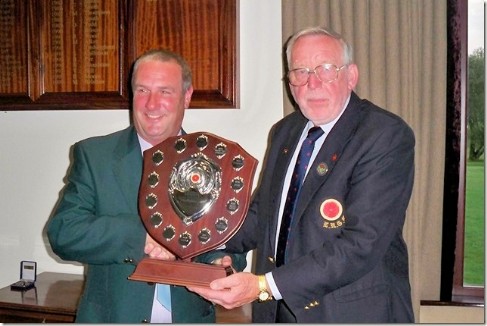 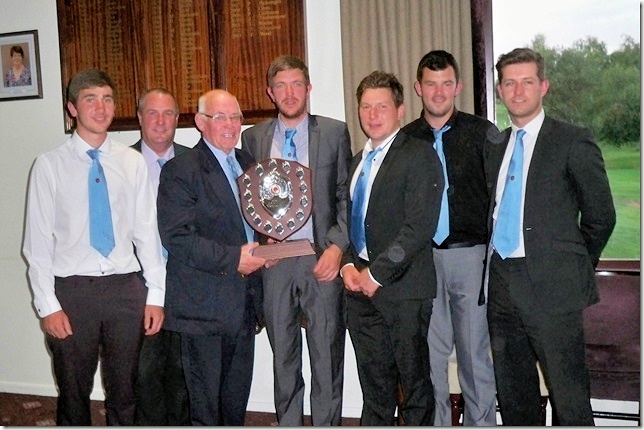 Unfortunately;-
Due to the difficulties the team captains come across in getting players to turn out and the problems of acquiring the use of courses it is highly likely that 2013 will have seen the last of the Lancashire Scratch League. It is a great pity. The idea was good one but never seemed to accumulate the interest from the regions.

The East Lancashire Golf Association, having won the League Championship back in 2005 and the Championship again in 2013, could well be the first and last holders of the title.

Tony Holt of Wilpshire and E.L.G.A. Executive member won the 2014 LANCASHIRE SENIORS CHAMPIONSHIP at Lytham Green Drive with two round scores of 73/71 beating Tom Lockwood of Penwortham by two Strokes and Andy Westwell of Pleasington, Curtis Clarkin of Nelson and Joey Lamb of Wilpshire all became Lancashire County Players.

The HAROLD RYDEN was won by Jonathan Hurst of Pleasington with Curtis Clarkin of Nelson taking the runner up spot.

THE 2015 HAROLD RYDEN was won by Michael Hunt of Pleasington @ Pleasington beating runner up
Anthony Harwood of Blackburn.
Curtis Clarkin of Nelson won the Scratch Medal