1970 ONWARDS
GOING FROM STRENGTH TO STRENGTH

The Lancashire Championship was held on an East Lancashire course for the first time in 1970. John Glover, representing Clitheroe Golf Club, won the Championship, at Pleasington, beating his county team-mate, Geoff Birtwell, in the final. John, an Irish International, made 130 appearances for Lancashire before going on to a fifteen-year involvement as Rules Secretary to the Royal and Ancient Golf Club of St Andrews. 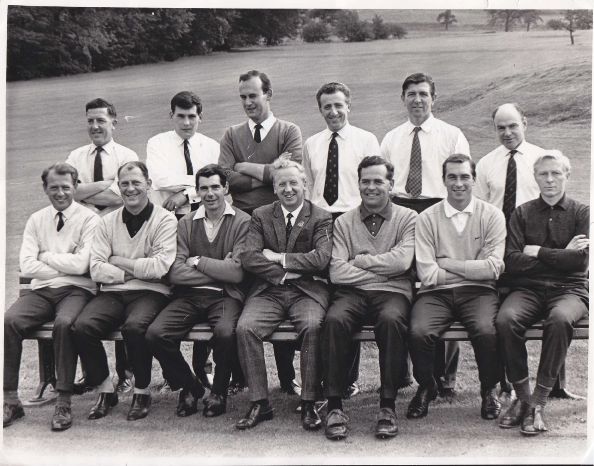 Clitheroe's Roger Altham, the ELGA Boys' Champion of 1967, won the 1971 Lancashire Boys' Championship, at Stand Golf Club, with scores of 70 and 74.
Jack Bowers J.P., a past-Captain and the immediate past-President of Burnley Golf Club, was the Association President from 1971 to 1973 and Ken Bamber, of Shaw Hill, was elected County President for 1972-1973.

Cedric Ingham, of Rossendale, younger brother of Derek, became Rossendale's third Association President when he succeeded Jack Bowers for the years 1973-1975.
At this time another brilliant young talent emerged in East Lancashire. Hogan Stott, who had joined Nelson Golf Club as an eleven year-old, in 1969, had by the age of sixteen, in 1974, attained a handicap of scratch and represented Lancashire in the first of his 29 appearances for the County. He went on to play for England Boys after winning the Lancashire Boys' Championship at Bolton Old Links, in 1975. Hogan won the England Boys' Stroke Play Championship in 1976 and represent England at full international level in the same year. He was a member of the Great Britain and Ireland side in 1977 and won the Lancashire Championship, at St Annes Old Links, in 1978, just before joining the professional ranks.
In 1975 Gilbert Espley, of Pleasington, became his club's third ELGA President but only held the office for one year, and in the same year Jack Bowers was elected President of the Lancashire Union. 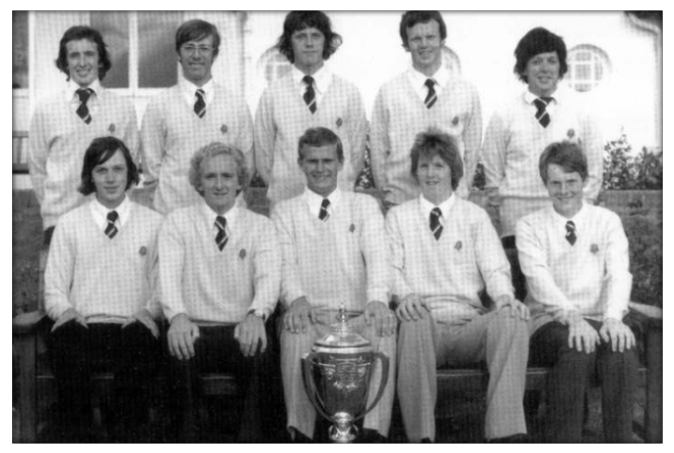 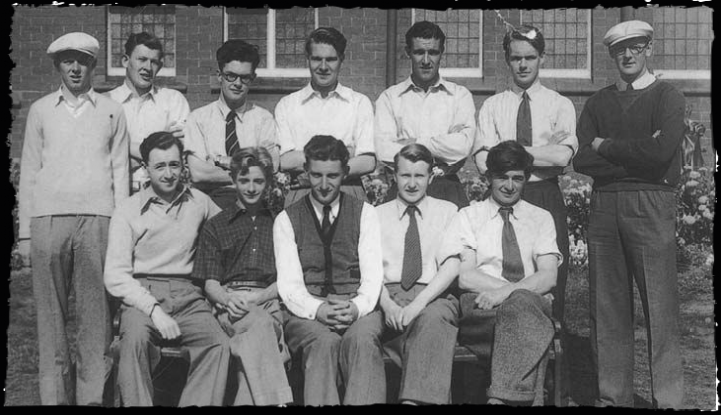 During Mr Esplev's year of office, Great Harwood's Gary Hindie was selected to play for the England Boys' team captained by Sandy Lyle. Gary played 28 times for Lancashite between 1975 and 1985, was ELGA champion on Five occasions, four of them consecutively). from 1978, and was the winner again in 1987. He appeared in the Championship finals eight times and was the winner of four ELGA Scratch Medals.

Blackburn Golf club, a founder member of the Associarion, had its first Association President when Frank Whittaker was elected in 1976.Frank, who heicl the office until 1978, represented Lancashire on 17 occasions, between 1951 and
1962, and was a beaten finalist in the county championship of 1957 at St Annes old Links. The county championship returned to East Lancashire in 1977, this time at Clitheroe Golf Club. ELGA were unable to produce a finalist, but Paul
McGlynn, of Pleasington, won the Lancashire Boys' title at Dean wood.

The ELGA Rules and Etiquette Championship was founded in 1981 by Barry Birtwistle of Colne Golf Club. Barry, whose company sponsored the event for 16 years,undertook to go to any ELGA club and hold a qualifying evening. The first finals, evening was held at Colne where each club could enter two teams of two. There were prizes for the winning team, individual awards and, in order to
add interest, a spectators prize. The venue subsequenty moved from club to club, Later the Championship was organised by Harold Fielding, of Clitheroe a past Champion, and lattery by another past Champion, Ray Royle, of Shaw Hill. Over the years the Championship has been dominated by Mr and Mrs T.A. Martin, of Wilpshire and Shaw Hill's R. Royle and B. Parkinson.

Another former Association Secretary, John Kay, of Clitheroe Golf Club, was elected Association President in 1982, the year in which Stonyhurst Park became a membef of the Association. Stonyhurst Park was only formed into a golf club in 1980 but the 9-hole course had been in use by Stonyhurst College students and the staff for a long number of years.

Tom A. Martin, a past-Captain and past-President of Wilpshire Golf Club' was elected President of the Association in 1984. Tom, who in 1955 played in one match for the Lancashire team, was the ELGA President when, during his first year of office, Pleasington hosted its second County Championship.

Blackburn's John Walsh was the ELGA President from 1986 to 1988' John, who made one appearance for Lancashire in 1948, was a past-Captain and past- President of his club, its champion eleven times and winner of the 1964 ELGA Scratch Medal, at Nelson.

Cedric Ingham, of Rossendale, the ELGA president of 1973-1975, was elected President of the Lancashire Union of Golf Clubs for 1986.
In 1986, Tevor Foster, of Accrington, was the winner of the ELGA Scratch Medal at Blackburn and made the first of his 108 appearances for the Lancashire team' of which sixty-one were victories and only 34-were losses. He won the 1986 Lancashire open championship at Crompton and Royton and went on to win the Lancashire Amateur championship on two occasions, the first at Lancaster in 1987 and the second at The Manchester Golf Club in 1990. Trevor qualified for the British Open, at Royal Lytham and St Annes, in 1988, leading-off the field on the first day but missing the cut for the final 36 holes by four strokes... He won the ELGA championship,in 2003, on his home course and retired from the county team at the end of 2005.

Peter Lawson, a past-captain and the long serving club solicitor of Burnlev Golf Club, was the Association president from 1988 to 1990.

Matthew Andrew, of Rossendale, won the Lancashire under- 15 Boys, championship at Whalley Golf Club, in 1988.
Matthew, along with Haslingden High School team mates and felow members of Rossendale Golf club, Gary Moron and Mark Parsons, won the 1990 English schools' Team championship, at the Robin Hood Golf club, Solihull, and qualified to represent England in the National Finals held on the New course at St. Andrews where they finished in fourth place.

In 1989, John Caton became Pleasingtons first president of the Lancashire Union and the tenth from an East Lancashire Club.

W.I.Wooley won the 1989 Lancashire Seniors, championship at Swinton patk. Ian, a past-captain and the incumbent president of Pleasington became his clubs third President of Lancashire Union of Golf Clubs when he was elected to the office in March 2003.

Peter Stocks, a past-Captain and the immediate past president of Bacup Golf Club, the donor of the PLM Stocks Trophy for the ELGA event became the ELGA president of 1990-1992.

In 1990, teams representing Nelson Golf club emulated the Burnley teams of 1935, and the Pleasington teams of 1963 and 1980, by winning both the Scratch Sheild and Handicap Trophy during the same season - The Burnly teams of 1995 repeated the double achieved by their 1935 teams. 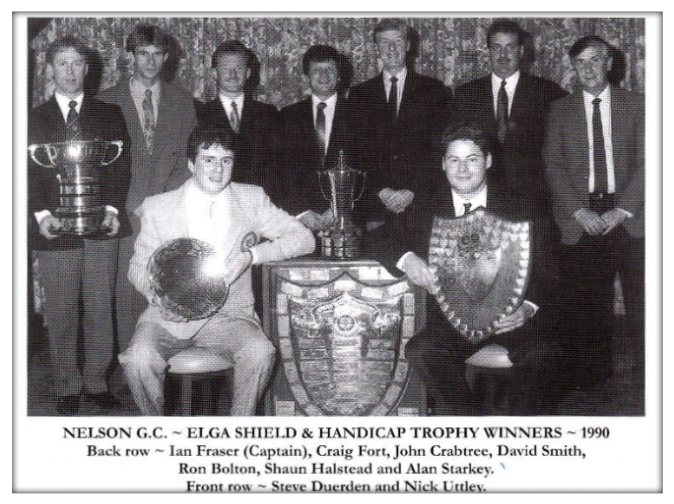 Stuart Andrew, another very promising young talent came to the fore at the begining of the nineties. Stuart, orginally a member of Whalley Golf Club before becoming a member of Clitheroe, won the Lancashire Boys' Championships two years in succession, 1991, at Blackpool North Shore and the following year at Lancaster. He was the ELGA Champion of 1992,winning the Harold Ryden Trophy at Blackburn, and in the same year made the first of his 21 appearances for Lancashire.

Stuart became a Lancashire Team member in 1990, he played alongside two other predominant East Lancashire golfers of the time, Trevor Foster and Nick Uttley, the Nelson Golf Club Champion.

Nick made the first of his 53 appearances for Lancashire in 1990 and won the Lancashire Open Championship in 1991
and 1992, both held at Whitefield Golf Club. He won the ELGA Scratch Medal twice, in 1990 and 1999 and became the ELGA Champion of 2002 at Blackburn.

In 1992, Barry Birtwistie, a past-captain of Colne Golf Club, the innovator of the ELGA Rules and Etiquette Championship and a member of the Executive Committee for nine years was elected president of the Association. Barry, who served as the chairman of the Lancashire Championship Committee, was the Lancashire Union's President of 1999-2000. He became A member of the English Golf Union Tournament Panel in 1996 and was elected chairman of EGU Northen Group ln 2004.

Ernie Wilkinson became the fourth Association president from Wilpshire Golf Club when he was elected in 1994. Sadly, he suffered a fatel heart attack whilst in office.

When Lancashire became the 1995 English County Champions, at Silloth-on- Solway, the Association was well represented by four East Lancashire based players in the County Squad - Trevor Foster, of Accrington, Nick Uttley, of Nelson, Stuart Andrew, of Clitheroe and Gary Morton, of Rossendale.

An extraordinarily talented young golfer came onto the East Lancashire scene in the middle nineties. Nick Dougherty, of Shaw Hill, won the 1996 Lancashire under-15 Boys' Championship, at Ashton and Lea.
Nick was the English schools' champion 1996 and 1997, played for the English Schools' Team 1997, the England under-16 Boys, England Boys and the Great Britain and Ireland Boys' team.
He was the winner of the inaugural Nick Faldo Junior Series and for three years the team captain of the GB Boys in the World Boys Team championships where he became the Individual World Boys Champion.
In 1998 Nick played the first of his eight games for the Lancashire side and in 2001 was an integral part of the winning Walker Cup side after which he began his professional career.

Ray Smith, of Blackburn Golf club, was elected ELGA president in 1996. A former Honorary Secretary of his club, Ray was its Centenary Captain and author of the club's centenary book, .Blackburn Golf Club 100 years.

Another Blackburn member, Ken Fish, followed Ray Smith into office in 1998. Ken, a former professional golfer who had been the Association's Junior Organiser for many years, was Blackburn,s fourth ELGA president .

Tony Jackson, of Blackburn Goif club, won the 1999 Lancashire championship. Held at Ormskirk Golf club, the final round was an all East Lancashire affair with Tony just managing to hold off the challenge of Shaw Hills 16 year old Nick Dougherty who finished just two strokes behind him after the four rounds.